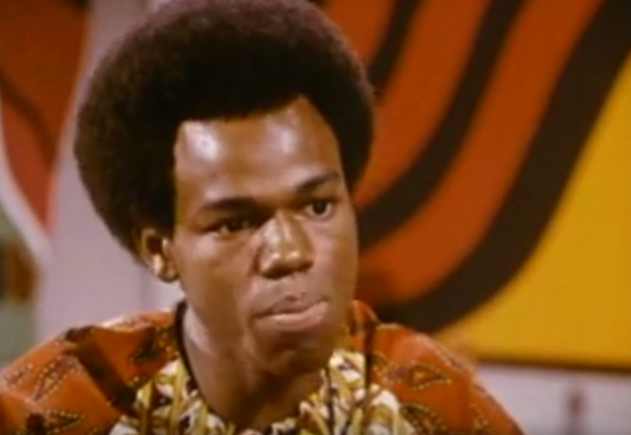 “The Cats Who Work Here are Elected by You.”

For those who think environmentalism started out as a white yuppie cause, please visit the early 1970s when inner-city LA was drowning in pollution. #Smog!

And the black community was outraged.

(Please visit the early 1970s in general. You will be stunned. The 1980s Reagan backlash  was so heavy and angry that we were just catching up with 1971 in 2016… Too bad Trump happened. We might be in for another 45-year setback now.)

On my recent three-day binge, watching Season 1  of Room 222 on Youtube (I watched before going to bed at night and then in the morning before work), I teared up during episode 20, “Once Upon a Time there was Air You Couldn’t See”; it aired on January 28, 1970. It turns out I watched it almost exactly 47 years later.

I must quote two moments.

And 2) The anti-smog  PSA Richie writes with his school mate, the gloomy and mumble-y Back-to-Africa kid, Jason Allen (played by and actor who simply went as Heshimu.)

“People just don’t care about smog. They think it’s just gonna go away. There was a big magazine just did a whole issue on smog. And it was scary. Told how the smog can make a cap in the atmosphere and keep in the heat and moisture. The polar ice will melt and flood all the coast. People are already dying of cancer from it. And fishes and animals too. Crops are gonna rot. Terrible stuff, but nobody is doing anything.”

And here’s Jason and Richie’s PSA on late night TV (Delivered by their wise teacher—the star of the show, Mr. Dixon…played by Lloyd Hanes).

“I’m on the air to talk to you about air. Air stinks. You know why air stinks? Because it has garbage in it. And garbage stinks. Not really this kind of garbage [a shot of trash cans]. This kind. [a shot of smoke stacks.] Garbage from businesses. They can fix it so they didn’t put that trash in the air. But they won’t. Because they don’t want to lay out the bread. That’s terrible. But that’s how it is. This is a good lung [a shot of a science text book picture of a healthy lung.] And this is what a lung cancer looks like [a science text picture of a sick lung]. You’ve got to ask somebody who has it how it feels. It don’t feel good. Exhaust from cars makes more trash. It makes your eyes burn. But people cool it. They wipe their eyes. And then they forget about it until the next funky day. People with asthma and allergies can’t forget it. And it gets worse for them all the time. That’s how garbage is. Dig? It never goes away. It just piles up and gets more terrible all the time. Getting mad does nothing. And getting sick from the air pollution will kill you. But it won’t stop the trash going into the air.

“The cats who work here get elected by you. [A shot of the state capitol building]. They’re going to vote tomorrow on if they should lay out the money to study smog. Get the straight thing. And then make the cats who can clean up the air, clean it up. You have a man in the legislature. Get on the phone. Call him tomorrow morning before the vote. Call your man between 8 o’clock and 10 o’clock. And lay it on him. Tell him to vote for spending the money. Like really man, people are dying from smog. No joke. Dying. You’ve got to call him tomorrow, or it won’t do any good. In the morning before they go to vote. Like this could be the end of the whole world. And if only half the cats alive die, they’ll be telling their kids, ‘Once upon a time, there was air you couldn’t see.'”

*For more on race and environmentalism, you could also just read Ta-Nehisi Coates’ Between the World and Me (2015), by the way.

I wrote a mini-essay, “Urbanism in Its Own Right,”  in September 2015 about Coates’ green grand finale.

“It’s been equally cringe worthy to watch my fellow white urbanists tying themselves in knots to justify green policies by couching urbanism as another brand of social justice. I’m guilty of this insecurity complex too. I published a guest manifesto on PubliCola last June by the leaders of the local Sierra Club titled “A Social Justice Urbanism.”

Yes, there’s power in intersectionality, and there’s plenty of overlap in progressive causes—women’s choice is also an economic issue, for example, just as the fight for $15 is a women’s rights issue. But the current urgency many greens feel to frame no-brainer environmental musts (like undoing our dependence on cars and building denser cities) as if urbanism is a twin cause with the Black Lives Matter movement, misses the larger point of the environmental calamity at hand.

Don’t take my word for it. Ta-Nehisi Coates, arguably the country’s leading African American intellectual, whose Between the World and Me, a treatise about the struggle of being black in America (named as a finalist for the National Book Awards this week), thinks so too.

I was on vacation last week, far away from Seattle, and I settled in to read Coates’s book. And bam: He segues into the transcendent ending of his book with these lines—“Plunder has matured into addiction; the people who could author the mechanized death of our ghettos, the mass rape of private prisons…must inevitably plunder much more. This is not a belief in prophecy but in the seductiveness of cheap gasoline.” He then makes the case that fighting sprawl and lowering carbon emissions is today’s paramount cause. “And the methods of transport through these new subdivisions,” Coates concludes, “across the sprawl, is the automobile, the noose around the neck of the earth.”

One thought on ““The Cats Who Work Here are Elected by You.””