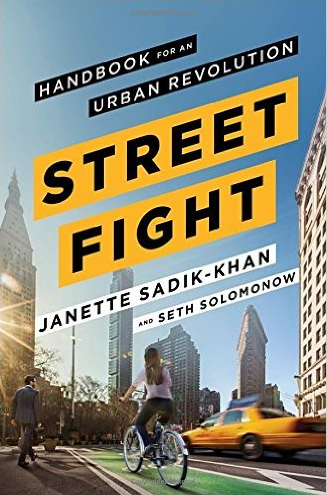 …a goal of reducing carbon emissions by 30 percent while improving the efficiency and quality of life in New York City neighborhoods and business districts. It also took the unusual step of laying the groundwork needed to accommodate  the one million more New Yorkers expected to live in the city by 2030…

changing the basic design and use of city streets.

First, megaproject monomania…clashes… Second…city residents who assert neighborhood-based preservation and resist not just neighborhood-destroying projects but also virtually any other change to the urban context. The future of our cities has fallen between these cracks, remaining stagnant as municipal governments plan big—sometimes too big—and urban communities routinely oppose changes in the status quo by thinking small—sometimes too small.

…the language of choices and safety…

from pocket parks and plazas in Mexico City and San Francisco to pedestrian- and transit-friendly road redesigns in Los Angeles and Buenos Aires, to parking-protected bike lanes in Chicago ans Salt Lake City

…when street design intersects with people…

…when we walk and when we don’t, the way we stop and go, the intuitive way we understand the road as we drive, walk, and bike along it—that reveals the code’s deeper meaning and its gaps.

Interpreting streets as places only to move cars instead of people turns cities into uninviting places for people.

Whether it’s Tiananmen Square, Mexico City’s Zocalo, the Bastille, Trafalgar Square, or Tahrir, Wenceslas, or Taksim squares, these are the places where life and history happen

A city whose streets invite people to walk, bike, and sit along them also inspires people to innovate, invest, and stay for good.

They are the mortar that holds most of the world’s population together. They must be designed to encourage street life, economy, and culture.

Real-world experience showed that reducing the number of lanes on carefully selected streets or closing them entirely not only provide pedestrian space and breathed new life into neighborhoods, but also actually improved traffic.

…roads turned into pedestrian oases atop space that had been there all along, hidden in plain sight.

…cold, sterile high-rises set back on superblocks, sucking life away from the street.

To Jacobs, a well-functioning neighborhood city street has a little of everything: shops, cafes, schools, libraries, recreation, and destinations that encourage walking day and night.

the city’s operating system of streets

Still in its raunchy era, with Ratso Rizzo hustlers

There was nowhere and no reason to sit outside

built right in the hearts of many American cities, destroying residential neighborhoods… and hastening urban demographic shifts from city centers to the growing suburbs

Engineered out of these street designs weren’t just traffic conflicts but all of the complexities of the street—the messiness that Jane Jacobs saw as vital to the street’s viability.

People were meant to make use of whatever was left over on the street after space had been created for cars.

…highways, depleting cities and nurturing the development of car-based suburbs and sprawl. They then claimed they were the only ones capable of solving the traffic problems they had helped to create, which they accomplished by building more and wider roads capable of processing even more traffic.

As the Moses/Jacobs story has been told and retold over the last four decades, Jacobs’s mode of grassroots resistance has been co-opted into a perverse politics of rejecting new ideas—and celebrating each defeated projects as a victory, even if that victory is the status quo.

Speaking at public hearings, local residents and business owners invoke Jacobs-like language as a smokescreen to fight Jacobs-like projects. They oppose plans for walkable neighborhoods and bike lanes, claiming that they might congest traffic, make streets less safe, and pollute the environment or erode property values. By invoking Jane Jacobs many NIMBYs today are effectively arguing that roads should be kept the way Robert Moses wanted them. It’s one thing to turn back a proposed development—a new highway, a convention center, a too-tall building or out-of-scale, traffic generating shopping mall. It’s another thing to say yes to people-oriented streets based on fresh and innovative new ideas that affirmatively rewrite the street’s operating code—its underlying geometry, essential function, and overarching meaning.

Cities must adopt a more inclusive and humane approach to reshaping the urban realm and rebuilding it quickly to human scale, driven by a robust community process, but committed to delivering projects and not paralyzing them.

reignite our cities after a century of street stasis

smaller scale interventions that can quickly and inexpensively  reallocate space, we can begin to restore the balance of the street and replace the vestiges of last century’s planning dogma, which ignored the human experience on that street.

—from the preface, the introduction, and chapters 1, Street Fight, by Janette Sadik-Khan and Seth Solomonow