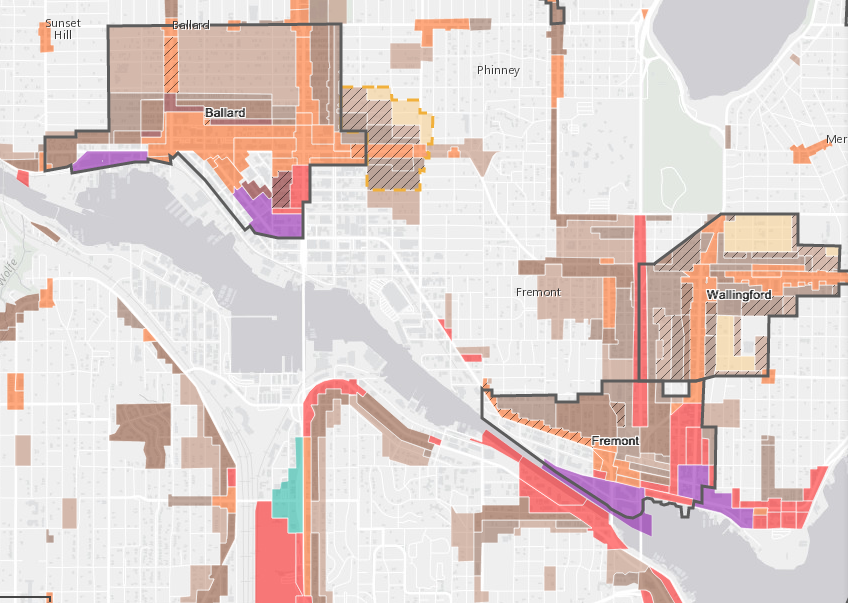 …there were some familiar faces who were missing from today’s HALA hearing—namely, the single-family homeowners and erstwhile affordable housing advocates who turn out in droves (and even sue the city) when a proposed upzone threatens to allow apartments (or cottages) in their North Seattle backyards. When the U District upzone was up before the council, for example, homeowners from across North Seattle filled council chambers, decrying developers as heartless opportunists and demanding greater concessions in the form of large affordable housing mandates that would have made the upzone unworkable. And yet, when an upzone that actually constitutes more of a giveaway to developers, because it will require them to build less affordable housing than in any other upzoned part of the city, came up, they were nowhere to be found.

Weird. It’s almost as if they care more about preserving exclusive single-family zoning in their own neighborhoods than they do about making sure developers provide affordable housing in every part of the city.

I’d like to expand one of Erica’s examples: The single-family neighborhood activists who sued the city over pro-density zoning changes that would allow more attached mother-in-law apartments and detached backyard cottages (ADUs & DADUs)  based their case on the argument that more development in their neighborhood would supposedly decimate housing affordability citywide. Yet, despite making housing affordability their political rallying point (and they successfully delayed backyard cottage development in single-family zones by forcing the city to do more studies*), they actually don’t seem to care about affordable housing payments from developers. Notice, as Erica pointed out, when developers are charged lower fees in downtown neighborhoods—even though those fees contribute to affordable housing citywide—it wasn’t an issue for the traditional neighborhood activists.

True to the term NIMBY, opponents of the new set of zoning changes only seem to care about the implications of development in their backyards. My sense is: They only care about the physical impacts, not the supposed affordability impacts.

The “populist” mantra they lead with—”Charge developers more!”—is a convenient talking point, but it’s not at the heart of their cause to simply stop development.

And it’s important to say this: If real estate values are identified as the fulcrum for raising affordable housing dollars, that equation will eventually find its way back to privileged single family  homeowners. In a city that’s short on developable land, exclusive single family zoning dramatically increases property values for single family homeowners.

*I’m looking forward to the additional study because I think it will actually settle the question of whether more development will undermine housing affordability by affirming that it won’t.

There is a potential silver lining, though. Seattle planners now have the opportunity to craft a definitive EIS that lays the groundwork for preventing the exploitation of SEPA by small numbers of entitled residents at the expense of everyone else. Priority one for the EIS is to establish the fundamental truth that regulatory changes allowing more homes are a net positive because more homes are a net positive. Optimistically, this path could lead to the exemption of all future infill housing construction from SEPA, expanding on what the city council recently approved for small and mid-sized apartment buildings in Seattle’s six official “urban centers.”

If there is anything of redeeming value buried in the hearing examiner’s decision, it is the chance for the City of Seattle to complete an EIS that once and for all lays to rest the ruling’s spurious arguments and demonstrates how the net positive benefits of ADUs dwarf the negatives. Ideally, such an EIS could lay the foundation for city rule changes that would exempt infill housing construction from SEPA entirely.

One thought on “Underlining Like Mad #163: “Erstwhile Affordable Housing Advocates””