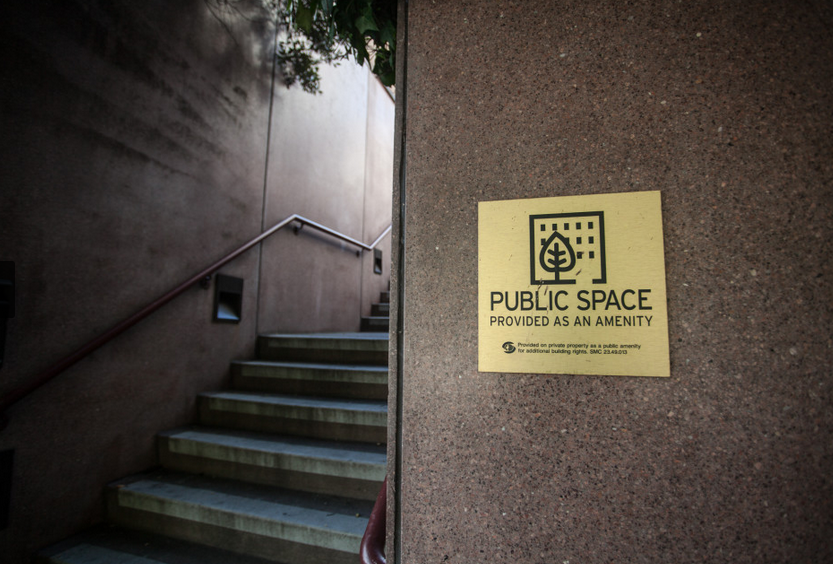 One of my final articles for Seattle Met last year  was about Privately Owned Public Spaces (POPS) …or as they’re known in extra-finicky Seattle, Privately Owned Public OPEN Spaces, (POPOS.) There are more than 40 of them in Seattle—plazas, atriums, mini-parks, and lunchtime hangouts where the public can stretch out to lollygag or hold protest signs. (Check out the slideshow that comes with the article.)

It’s a cool concept: Developers can get leeway on zoning rules if they agree to make a portion of their projects open to the public with all the requisite free speech rules that don’t otherwise apply on private property…. (though shouldn’t the 1st Amendment apply…all the time…?)

I was pleasantly surprised to see this NYT report on NYC’s POPS today.

Unlike Seattle, where excellent lefty former City Council member Nick Licata locked down the free speech rules, NYC doesn’t have a good track record of enforcing the public benefit mandate, including at Trump Tower where our fake populist president flouted the democratic rules at a POPS on his property which allowed him to build 20 stories higher than allowed.

The NYT reports on the current POPS violations:

The building was one of more than 180 properties where public spaces did not comply with the city’s rules — more than half of all locations with privately owned public spaces in New York, according to the audit.

Privately owned public spaces, commonly known as POPS, are areas that developers have agreed to provide the public in exchange for leniency on certain zoning requirements.

Zuccotti Park, of Occupy Wall Street fame, is one — where they have been a popular mechanism for developers to build taller, more valuable buildings in areas with limited space.

It is no secret that landlords often do not maintain the public spaces as initially designed. But the audit released by the comptroller’s office illustrates just how widespread these violations are.

Auditors found restaurant tables at public spaces at 825 Third Avenue, 200 East 64th Street and 2 Gold Street. They also discovered signs that incorrectly informed people that the public spaces were for “members only,” at 175 East 96th Street, or “private property,” at 101 Barclay Street. And one privately owned public space, part of a lot at 410 East 58th Street, was eliminated when a building was constructed over it.

“Right now, some large developers are gaining benefits worth tens of millions of dollars, but it’s coming at the expense of the rest of us,” Mr. Stringer said in a statement.

Forty-one of 58 locations inspected in the past four years were noncompliant, while only 10 were issued violations by the Buildings Department. At least one other building in the Trump Organization portfolio, the Trump International Hotel and Tower in Columbus Circle, was among those in violation of a previous agreement, the auditors found. The building lacks a food kiosk with public seating that it had agreed to provide, the comptroller’s office said.