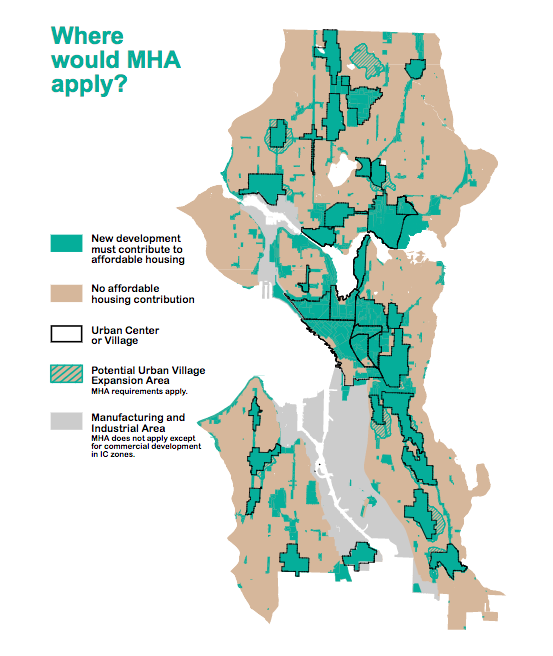 This new program also broke up the historical (and odd) social justice/NIMBY alliance that kept new development out of neighborhoods and sequestered it into more urban areas, a monumentally inefficient and profligate land use gaffe.

It’s not the Planning Commission’s support for MHA that makes their letter so daring (though, the mayor’s call for upzones does make MHA unpopular with the loud, traditional, single-family, neighborhood vote.) But, let’s be honest, despite the lesser-Seattle opposition, the Left-to-Right city council is passing the upzones unanimously.

It is brave (and a bit radical) for the Planning Commission to stand up to conventional, Seattle wisdom by defying populist emotions with data.

Here are the two sections of the letter that make this alt-Left point:

Maximize growth capacity in areas with a high-risk of displacement while providing permanent affordable housing opportunities instead of seeking conservative rezones and boundary expansions.

Historically marginalized communities may fail to benefit from new development if it does not result in affordable housing and economic opportunities; however, a limited housing supply may only accelerate competition and displacement of lower-income residents and communities with cultural anchors in these areas. Pair rezones in areas with a high risk of displacement with incentives to provide affordable performance units.

In areas with a high risk of displacement, consider implementing alternative anti-displacement strategies instead of raising MHA requirements beyond what the market or intensity of rezone dictates.

MHA is an essential anti-displacement tool when paired with complementary anti-displacement strategies. The Planning Commission is concerned that increasing MHA requirements in areas with a high risk of displacement may have negative consequences on Seattle’s historically marginalized communities by stagnating growth, exacerbating housing shortages, and further limiting access to jobs, housing, and amenities. While we acknowledge that some communities hope to combat displacement by deterring growth, discouraging new development to retain existing naturally-affordable units, this does not preclude rents from rising, and may in the future cause land to be underutilized. A lack of new units contributes to an overall scarcity of housing options that drives up competition and cost.

As Seattle continues to grow, the fundamental task at hand is not to halt growth and prosperity, but to improve housing options, economic opportunities, and neighborhood amenities without displacement. More permanently affordable housing and investments in community infrastructure are needed to stabilize Seattle’s most vulnerable populations and make sure that existing communities are benefiting from growth in their neighborhoods. Consider incentivizing and encouraging performance units in urban villages identified as having a high risk of displacement, and continue to expand funding for place-based strategies, such as the Equitable Development Initiative, that incorporate specific strategies to address community concerns and build capacity in historically marginalized communities.

FOOTNOTE: I do think the Planning Commission needs to be more specific about their sanguine conclusion that their alternative recommendation, incentives for development in poorer neighborhoods, will generate more affordable housing.

I’m sympathetic to their pro-development POV, but the Planning Commission needs to outline exactly what incentives they have in mind.