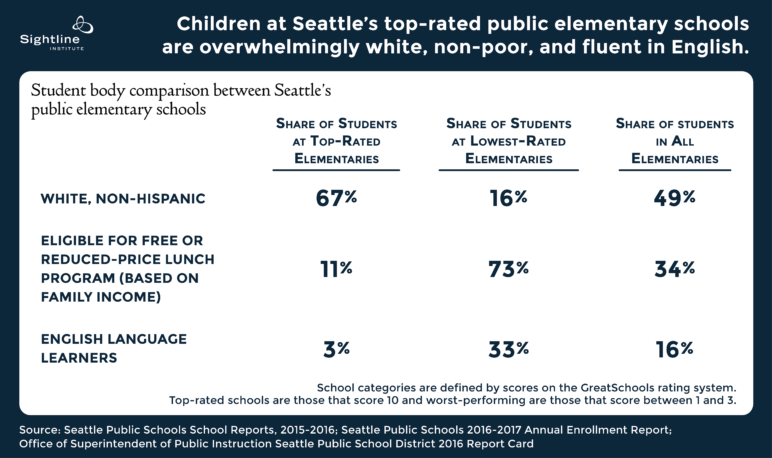 From Sightline: “Research links high-quality early education with lifelong benefits: higher adult salary and education level, greater likelihood of owning a home, having a 401(k) and saving for retirement, as well as lower likelihood of teenage pregnancy, incarceration, tobacco use, and depression. Unfortunately in Seattle, the benefits of a top-notch elementary education are disproportionately available to children from white, English-speaking families with high incomes. … More flexible zoning code could be one important tool in reversing segregation among Seattle’s public schools.”

There are no metaphors! Only results! I say …

..tho, I have to admit, Sightline has come up with a pretty damning metaphor: They’ve got a nifty illustration of how Seattle’s zoning code, which sets aside a stunning 65 percent of developable land for single-family homes, is preventing and eviscerating equity in our city.

Crunching the data on where Seattle’s best performing elementary schools are located, they show how Seattle’s exclusive zoning is hurting the city’s kids.

Please read Sightline Senior Research Associate Margaret Morales’ report in full, but per usual with these excellent, in-depth Sightline policy papers, I’m going to provide my own CliffsNotes headlines and then quote the post at length.

Though Seattle boasts many high-performing public elementaries, most of them sit in the city’s most expensive and restrictive residential neighborhoods—places where zoning regulations prohibit nearly any housing that isn’t a single-family, detached structure. On average, single-family zoning covers 72 percent of land in attendance areas of Seattle’s 13 top-rated, non-option, public elementaries. (The city has 16 schools that received a perfect 10 score on the GreatSchools rating system. Three of these schools are option schools, which don’t have typical attendance areas, and so these are excluded from this calculation.)

When communities impose this kind of restrictive zoning pattern, it results in only a small slice of the city’s families being able to afford homes within most of the top schools’ attendance zones. Housing prices average over 20 percent more in neighborhoods surrounding the city’s top 16 elementary schools—all those that received a 10, the highest score possible, on the GreatSchools rating system—than in the city as a whole. In addition, these neighborhoods offer a lower proportion of rental units than the city average. And, in many cases, this cycle reinforces itself: wealthier neighborhoods pour private funding into their public schools via PTAs and other fundraising, paying for things like added tutors, smaller class sizes, and after-school enrichment programs. These private dollars likely boost school performance and in turn, the presence of a top-ranked school further boosts real estate prices in the vicinity. …

By legalizing a broader spectrum of housing options in single-family zones, and therefore a range of price points, more students with diverse economic backgrounds could attend Seattle’s top public schools.

Though the district as a whole boasts many strong schools, most of them sit in an east-west strip north of downtown and south of 85th Street, as shown in the map below. Another small cluster is in the northern half of West Seattle. Both of these areas are also sites of much of the city’s most expensive residential real estate, restricted by single-family zoning. 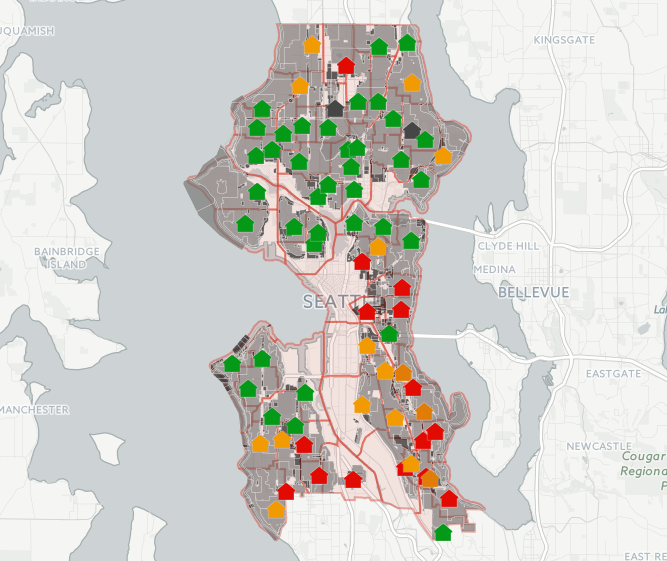 Zoning decisions shape more than building types; they decide who lives where. Restrictive zoning results in less diversity in the housing stock near these schools: more than two-thirds of the dwellings in census tracts surrounding the city’s 16 10-rated schools are single-family homes. In comparison, about half of the city’s overall housing stock is single-family homes. And home values in these schools’ neighborhoods reflect this crunch, averaging 20 percent more than the estimated value of the typical Seattle home.  For example, the figure below shows that the average home price in the neighborhood surrounding Montlake Elementary surpasses $1 million. For families that can’t afford to buy a home, it’s also particularly difficult to find and afford a rental near the city’s top schools. On average, census tracts surrounding 10-rated schools have 11 percentage points fewer renter-occupied units than average in the city, and rent is $334 more per month near those schools.

The city’s choices about zoning…is one factor that yields a school district that is increasingly segregated by income and race.

In Seattle, the benefits of a top-notch elementary education are disproportionately available to children from white, English-speaking families with high incomes. For decades, most public policy efforts to redress this inequity have focused on transporting some children daily to integrate schools, and such approaches may deserve fresh attention in Seattle.

Zoning is just one piece of a complex puzzle, but a modest additional contribution to school desegregation by race and class could come from allowing more duplexes, cottages, and other housing choices in the single-family zones that surround many top schools.

Multi-family homes in Seattle’s single-family zones create nearly 2,500 additional homes within easy walking distance, a half-mile, of Seattle’s 37 high-performing public elementary schools—those that hold a rating of 8 or higher on the GreatSchools index for performing above the state average on standardized tests. More than 2,000 of these homes are duplexes, triplexes, and townhomes and are the result of Seattle’s historically more flexible zoning code (in other words, they would not be legal to build today). The remainder of these units are ADUs—backyard cottages or mother-in-law apartments within a house. These data comes from Sightline’s map of all multi-family housing units in single-family zones. (For a primer on how to read the base map see this previous article; for more information about how to navigate our added schools layer, read the appendix below.)

Each of these multi-family units in single-family zones surrounding the Emerald City’s top public elementary schools represents much-needed diversity in the housing stock. Accessory dwelling units and many of the ‘plexes are rental options in rent-parched neighborhoods. They create housing options for families not able to purchase a home at the city’s high asking prices. The townhouses and rowhouses may be owner-occupied and often come with a lower price tag than a typical detached single-family home. Allowing more of these kinds of homes in single-family zones could create a greater range of housing prices, potentially welcoming more families to rent or own homes near top-notch schools.

Increasing the diversity of housing options in the vicinity of high-performing schools and therefore boosting the number of kids who live in these schools’ attendance zones might seem like a recipe for crowding the schools. While this analysis does not include an assessment of space for additional students in each building, nor options for expanding that space through things such as the portable classrooms that Seattle used extensively during the baby boom, it’s relevant to examine the number of children in the neighborhoods in question. This figure below shows the population over time of children under the age of 18 living in the census tracts that hold today’s highest-rated Seattle elementary schools.

Currently housing diversity found on most land surrounding the top schools is either a fluke of zoning codes past or a result of ADUs that were built by owners willing and able to surmount steep regulatory barriers. Different choices—and attitudes—about zoning are one key for the city to open up its best schools to more children. Current regulations excessively limit and slow ADU construction. Removing these policy barriers could provide more housing options in more neighborhoods. In addition, the proposal in the city’s Housing Affordability and Livability Agenda to permit a greater range of housing options in single-family zones, including small ‘plexes and townhomes, could create housing that fits a range of family sizes, styles, and needs.

Seattle has the opportunity to foster more welcoming neighborhoods and in doing so help dismantle a structural factor in the resegregation of its schools. Diversifying housing options in single-family zones near public elementary schools across Seattle would make a difference for one of the city’s most vulnerable, and precious, populations: its kids.

One thought on “Dumb Growth”