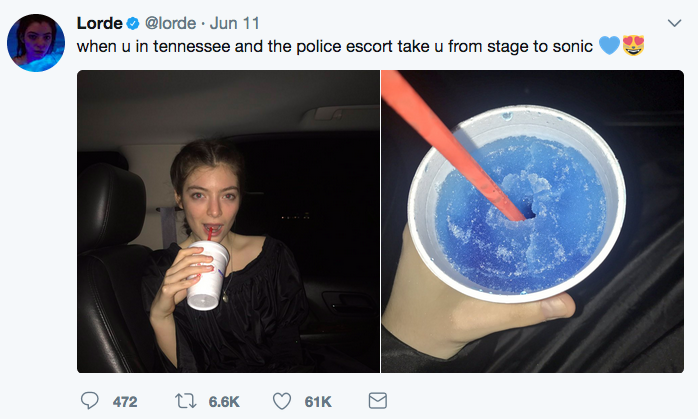 Underlining Like Mad #179: “I Know There are Perfect Places.”

When Lorde released her sneak peek single “Green Light” in march (complete with a Singin’ in the Rain-video, as if she were Gene Kelly spinning on sidewalk lamp posts), she quickly started saying her new record, Melodrama, “feels like the city”…as opposed to her first record, which she said “feels like the suburbs.”

Suburb-to-city revelations are common for coming-of-age manifestos, where city life usually symbolizes a big change for the main character.

And it sounded like our main character, Lorde (!), was cuing up that exact sort of literary statement about place with her new album.

In a couple of interviews in the run up to the June release of the new record, Lorde even got reverent about New York City’s subway system saying she wrote a lot of the album while riding on the subway.

And then there was this from her twitter feed in March:

Melodrama is out now!

The line about the subway, which comes in a show-stopping number  called “Writer in the Dark” (dumb title), certainly lingers on her new life in the city as she reflects on how different she’s become… (She sings it a cappella in that 2nd video I linked above.)

I still feel you, now and then/Slow like pseudo-ephedrine
When you see me, will you say I’ve changed?
I ride the subway, read the signs
I let the seasons change my mind
I love it here since I’ve stopped needing you

But it turns out subways aren’t much of a theme on Lorde’s new record. (Iggy Pop’s transcendent “The Passenger,” about riding the Berlin subway, is probably the greatest Urbanist hymn when it comes to mass transit.)

I always thought Lorde’s first LP, Pure Heroine, a doleful, minimalist essay about the suburbs, with its late night meetings at tennis courts and sad car rides (“I love these roads where the houses don’t change”), was actually about the city all along anyway. Like so many suburban critiques, Pure Heroin’s story highlights the city by default, pointing to the city as a solution…or at least as an escape… “we count our dollars on the train to the party.”

On her new album, Lorde turns her attention to soulless suburban house parties. But too bad for urbanist policy heads, the larger theme of the record isn’t the politics of place. It’s the politics of relationships and introspection; there’s a big deal break up looming over all the shallow hook ups, drugs, and drinking.

There is one poetic description about drunk driving, though, which certainly seems like a specific protest against suburban culture—DWI deaths are more of a risk in the suburbs than in cities.

“We’ll end up painted on the road /red and chrome /all the broken glass sparkling,” she sings in a startling  verse from a (great) song called “Homemade Dynamite.” (I love the flute sample in that song.)

But the house party doldrums under the microscope on Melodrama aren’t fodder for a suburban takedown. Instead, they’re fodder for a takedown of plastic love in general. Even “Homemade Dynamite’s” drunk driving PSA lands with a critique of superficial connections rather than a critique of car culture… “I guess we’re partying.”

(It should go without saying: There’s shallow partying in cities too.)

Lorde only explicitly says the word “city” twice on the record. In “Green Light” she sings “I whisper things, the city sings ’em back to you,” which sounds like some sort of beautiful hex uttered at Midnight on Orchard & Delancey.

And in the slightly crowded, and slightly unfinished Musique concrete poem, “Hard Feelings,” it sounds at first like Lorde sings “it’s a magical city” …

But really, she sings: “I’m at Jungle City…,” which is the name of New York recording studio.

Guess this is the winter
Our bodies are young and blue
I’m at Jungle City, it’s late and this song is for you

Alas, Lorde’s new record doesn’t seem to be the Urbanist treatise she hinted at (or the one I wanted.)

That’s not to say Melodrama isn’t a wonderful record. Listening to “The Louvre” on headphones on vacation, walking across the Waterloo Bridge over the Thames with a blue slushy in hand was pretty perfect.

On the Jubilee and the Waterloo Bridge, London, 7/3/17

Melodrama is also all I listen to on the walk to work. My 40-minute walk  gets me nine songs in, to a catchy Moroder disco bounce tune called “Supercut.”

(Here. Are. Some of the. Rave reviews. Melodrama is getting.)

As personal as Melodrama’s details are, her words remind me again and again of things I wrote at 19 or 20—memories of bedroom dancing and grocery runs, the astonishment of your first really big city, mundanity inscribed with the thrill and luxury of giving oneself over to heartbreak. I’m older and my memories are fading, but I know there are perfect places, because Lorde makes them sound real.