The urbanist movement is often accused of having a privilege problem, which is a fair criticism; it’s mostly a white crowd of academics, activists, bikers, bloggers, and environmentalists. But let’s be clear. As opposed to the urbanists’ main antagonists, the Not in My Backyard (NIMBY) activists, whose privilege is actually enshrined in city code, the main cause of urbanism is to undo privilege. The number one urbanist demand? Change city code to create more equity, particularly when it comes to housing.

Yes, there is still prickly resistance to allowing more multi-family housing in single-family zones (from an unlikely alliance of class-conscious, social justice leftists and comfy property owners.) But the momentum of a new, unprecedented YIMBY (Yes in My Backyard) movement can no longer be ignored.

This week, just as all the slow-it-down candidates in Seattle’s municipal primary election were faring badly (again), the NYT published  a clear AF opinion piece that put single-family zones, and the idea that they amount to racial “economic segregation,” into the national conversation:

“Such economic zoning was rare in the United States before World War I,” Richard Rothstein of the Economic Policy Institute notes in his new book, “The Color of Law,”

Rising class segregation by residence is partly related to rising income inequality, but it is also the result of an expansion of exclusionary zoning.

There’s a theory known as “Multiples,” and I think it’s apropos right now. It’s the idea that similar revolutionary ideas often pop up all at once in different places. The intent of the Multiples theory, I think, is to re-conceptualize supposedly radical concepts as little more than zeitgeist responses to prevalent contemporary problems.

The emergent YIMBY challenge to exclusionary zoning certainly seems like a case of Multiples, as community after community immersed in a nationwide affordable housing crisis shakes off traditional (knee-jerk lefty) responses to rising rents.

It seemed like an obscure and hyper-local angle for a social justice movement when we first started advocating for changes to Seattle’s sweeping single family zone code back in the mid-2000s. (The SFZ lock on Seattle’s land puts a limit on multifamily housing, and in turn, drives housing prices upward, pricing out poorer, and disproportionately African American, households.)

There was a flash of hope ten years into the fight, though.  In the summer of 2015, the City finally tried to challenge the sanctity of Seattle’s single family zones—which make up around 60 percent of Seattle’s developable land.

In early July 2015, Mayor Ed Murray proposed allowing multifamily development in SFZs; at the root of the recommendation was the startling idea that Seattle’s single-family zoning code was racist.

The proposal turned out to be too radical for Seattle; lots of people protested that apartments would destroy single-family neighborhood character, and the mayor tabled the idea.

I was incredibly disappointed, but a smart (and sanguine) friend pointed out that the radical idea could never truly be withdrawn once the mayor proposed it.

And, indeed, recognizing the outsized influence of single-family zone stalwarts, the mayor subsequently took steps to change the political dynamics in Seattle. In the summer of 2016, exactly a year after the radical zoning recommendation failed, the city’s Department of Neighborhoods  ended formal ties with the neighborhood district councils, community groups made up predominantly of older, white homeowners who had long served as neighborhood power brokers at City Hall.

Murray signed an executive order yesterday that formally ends the district council era, dating back to 1987, and directs the city to come up with a way to get more diverse input into community spending. Saying he wanted to hear from people such as immigrants, people of color, youth, renters (who make up 52 percent of the city), single parents, and people “who couldn’t make it to 7pm community center meetings”…he specifically mentioned his hair dresser…, Murray is asking Department of Neighborhoods director Kathy Nyland to revamp how the city does official outreach.

My friend was right. The new challenge to single-family neighborhood power wasn’t going to go away.

The following winter, Murray’s state of the city speech revisited the original zoning recommendation. (By this point, I was working for the mayor). Using a social justice angle similar to the one that had been used to dismantle the neighborhood councils, the mayor linked Seattle’s outspoken opposition to the new Trump administration’s exclusionary agenda with a challenge to Seattle’s supposedly liberal single-family homeowning class:

Growth is not the question – growth is here. On average, 67 new people are moving here every day.

If we do not build more housing, we have seen what happens: more and more people compete for the same homes and prices go up, creating an invisible wall around our neighborhoods and locking people out.

We cannot be a city where people protest the exclusionary agenda coming from Washington, D.C., while at the same time keeping a zoning code in place that does not allow us to build the affordable housing we need.

But we have shown we are a welcoming city. A city that breaks down walls.

Since that time, the city council has unanimously passed a series of neighborhood upzones with the support of both developers and social justice neighborhood activists! (The latest one was in the Chinatown International District this month.)

And more importantly, a full-fledged Seattle YIMBY movement has emerged and allied  with YIMBY movements all over the country that are fighting similar battles.

…Interesting alliances could coalesce around an economic fair housing act. On the left, civil rights groups, affordable housing advocates and antisprawl environmentalists could ally with groups on the right, including libertarians who oppose government regulation on principle and developers who chafe at restrictions on building density.

It’s an accurate description of the new coalition that’s against exclusionary zoning, but I think it’s more revealing to talk about the coalition that has supported single-family zoning in Seattle all these years—because it highlights how thin our city’s progressive values actually are.

In a 2015 article describing the urban affordable housing crisis, City Lab outlined a coalition between social justice leftists and anti-growth neighborhood activists that mirrored the situation in Seattle:

Instead of forming a pro-growth coalition with business and labor, most of the San Francisco Left made an enduring alliance with home-owning NIMBYs. It became one of the peculiar features of San Francisco that exclusionary housing politics got labeled “progressive.” (Organized labor remained a major political force throughout this time period, and has allied with both pro-growth and anti-growth forces, depending on the issue.) Over the years, these anti-development sentiments were translated into restrictive zoning, the most cumbersome planning and building approval process in the country, and all kinds of laws and rules that make it uniquely difficult, time-consuming, and expensive to add housing in San Francisco.

It’s our own version of What’s the Matter With Kansas?—the 2005 book in which Thomas Frank tries to explain how working-class Americans came to vote for right wing politicians against their own economic self-interest. In San Francisco’s case, many tenants came to vote against new development in an attempt to show their disdain for monied interests. The problem is that this stance happens to result in very expensive rents in the long run.

City Lab’s description outed what had been a longstanding, but sort of incognito, alliance in Seattle between single-family homeowners and social justice lefties. Their common ground? Steep developer fees to fund affordable housing.

That solution, however, stymies supply (and raises housing prices) by cordoning off a huge swath of land, simultaneously propping up privileged neighborhoods with inflated housing values, exclusive schools, and a disproportionate amount of city amenities like parks.

The 2017 mayoral election comes at a pivotal time for the urbanist movement. The most contentious parts of outgoing Mayor Ed Murray’s keystone achievement, the Housing Affordability and Livability Agenda, remain unfinished, and conservative anti-density advocates have made common cause with anti-gentrification activists on Seattle’s far left, a potent alliance that could thwart efforts to address the city’s housing shortage.

Farrell finished in the top four—in a field of 21 candidates—without any major media backing. And the top two finishers support the pro-housing, urbanist agenda. (Meanwhile, the slow-down development candidates floundered.)

It’s tricky for Seattle to grok that our friendly single-family neighborhoods, even with all their progressive “This house believes…” signs, are actually part of the problem. 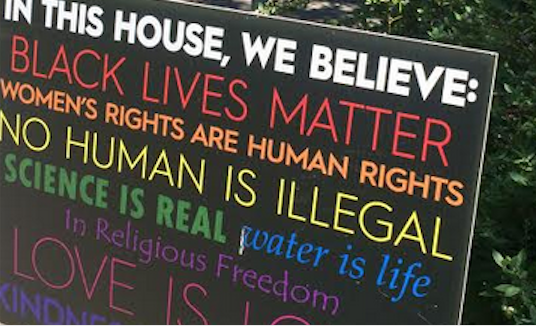 We must ask: While homeowners say “In this house…Black Lives Matter,” are they also willing to open up their neighborhoods, so Black lives can live there?