The Seattle Times’ attempt to bust Transportation Choices Coalition (for being a successful transit advocacy group…that follows all state disclosure rules??) unwittingly reads like a fundraising letter for the scrappy nonprofit:

TCC has evolved from a community group advocating for bike, pedestrian and transit options into a political powerhouse…

TCC’s advocacy results in resources being shifted from general-purpose roads to transit, bike lanes and other alternatives, by shaping criteria government uses to prioritize spending…

My advice to TCC deputy director Carla Chavez? Run the article as your next funding appeal.

Another weird thing about that article: It implied that recent, overwhelming pro-transit election results, like ST3, the Seattle-only Metro levy, and the Move Seattle levy that TCC supported, were somehow illegitimate.

Here’s the background: 501(c)3 nonprofits, like TCC, are limited in how much lobbying and electioneering they can  do—they can’t endorse candidates, for example. The tradeoff is that they are allowed to conceal their own donors from the public. By comparison, 501(c)4s, overt political action committees, have to reveal who their donors are.

Citizens United has created a  loophole that allows 501(c)3 nonprofits to turn around and contribute to overt political campaigns in quiet quasi-laundering schemes that mask the original donors. The Washington State Attorney General caught the Grocery Manufacturers Association doing just that in 2013 when the industry was trying defeat a GMO labeling measure.

I wrote a couple of articles for PubliCola about the ability of nonprofits to conceal donors, including a report on state Sen. Andy Billig’s (D-3, Spokane) legislation to make any contributor that contributes more than $20,000 to campaigns reveal its own donors.  The Times article notes Billig’s bill as a possible fix to the problem.

But here’s the problem with the Times article: the Citizens’ United loophole isn’t unique to TCC.

More importantly: With the exception of in-kind contributions to 2015’s Move Seattle levy, for example, totaling less than $10,000 (which is less than Billig’s threshold for reporting donors), TCC hasn’t made any notable financial contributions to any campaigns in the first place. In other words, by the Times own standard, the Citizens United loophole that allows nonprofits to contribute to campaigns without disclosing their own donors isn’t a relevant criticism of TCC.

Meanwhile, it’s clear from the Seattle Times article itself—which conspiratorially listed public agencies that have donated to TCC over the last decade ($351,855 from Sound Transit, $363,500 from King County, $256,620 from Seattle and $73,500 from Pierce Transit)—that TCC’s major donors are public information, available through the group’s tax reports.

TCC’s sister 501(c)4, Transportation for Washington, has contributed to a bunch of pro-transit candidates, and it also lists its contributors publicly; all this information can be found at the Public Disclosure Commission. 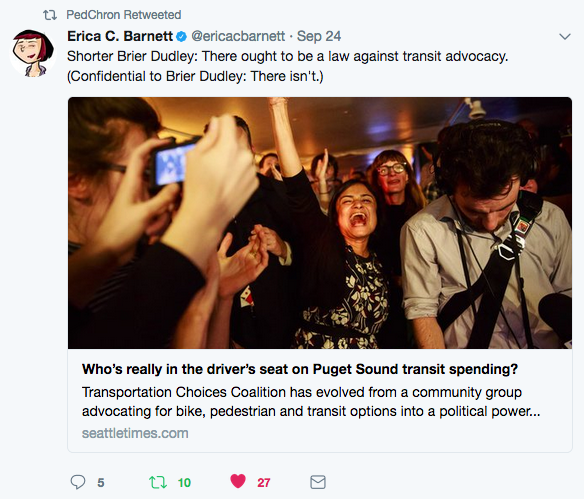